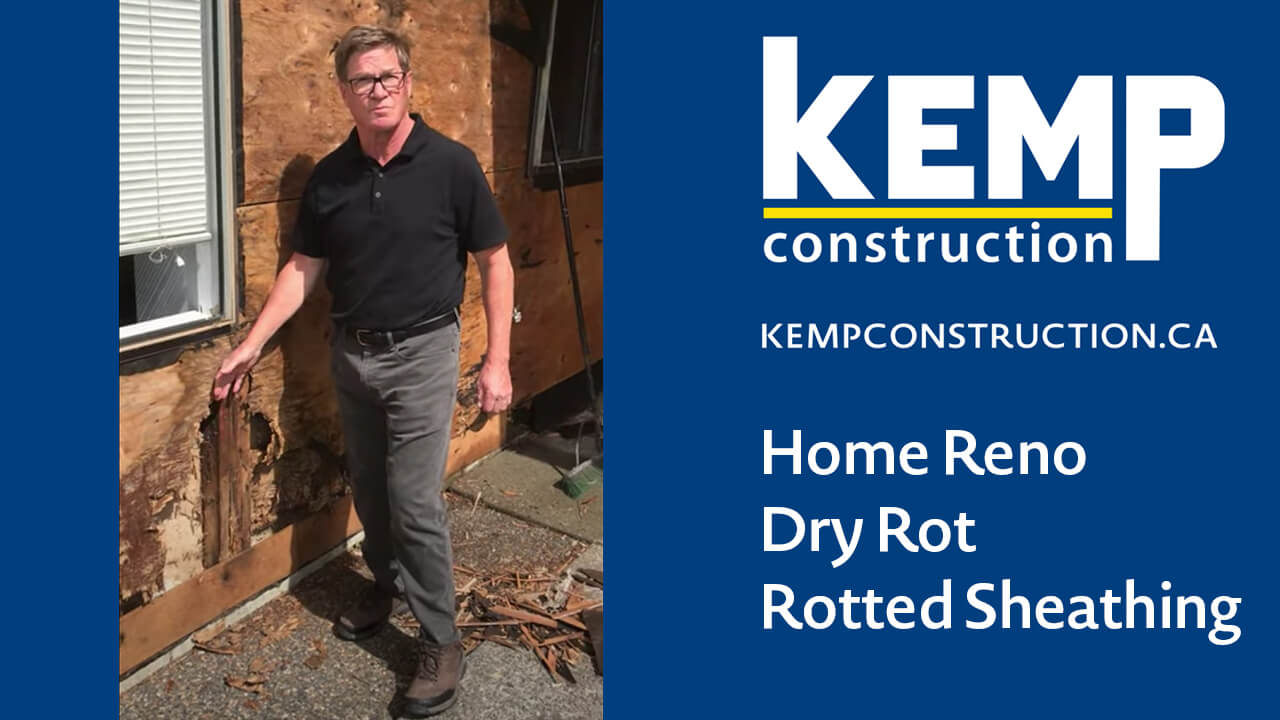 Taking care of the home’s exterior

For this home renovation, Kemp Construction managed the project as the general contractor – lining up the trades, scheduling the work, managing all the payments to the contractors. The project required a complete exterior facelift to remove damages due to dry rot. It took several months and resulti in clients really delighted with the outcome.

In the videos below, Steve Kemp shows what happens when a house is not built according to code, in terms of the sheathing and the flashing. This home was built back in the 70s and shows what happens when an older home is not properly protected. The sheathing is only 3/8 inch and the standard today is 1/2 inch. Water penetrated through the siding and right into the sheathing which then soaked the framing of the house. Wood that is forming the structure of the house is completely rotted out. This happens over time when the building envelope leaks. The water simply gets transferred deeper and deeper into the building to the point where it starts to rot. The new rain screen process that is used today, eliminates almost all of this kind of event happening.

Here, Steve looks at more of the deterioration caused by the moisture damage discovered during the exterior home renovation. The sheathing shows obvious signs of dry rot because it has been going through different cycles of moisture and drying. In the Lower Mainland, the southeast exposure is the most susceptible because in the winter the rain comes at an angle – due to the winds.

Over time, unfortunately what led to this extent of damage is that the siding was not properly fixed back in day one when it started to shrink and crack and open up. As soon as the building envelope has any sort of cracks, particularly on this southeast exposure, then, the house is liable for moisture to be penetrating and getting deeper into the wall system. Structural membranes – jack studs – that support the window are completely rotted as well.

One other important detail (not mentioned in the video) is that the garage is lacking a concrete curb. A mini foundation wall – about 6 -8″ high on the exterior bottom of the wall – could have prevented the water from wicking up from the walkway and into the wood.  Once the water gets into the wood, it will continue moving up the wall if it does not have a chance to dry out.  This was the case with this wall orientation due to it being on the shady side of the house – which is also the side that gets blasted from the winter rains here in the BC Coast, Vancouver.

Structures weakened by rotten framing are at higher risk on the West Coast because of the fault line.

On a different note – one of the other issues with a house that’s deteriorated this badly is that it’s in the Cascadia Subduction Zone seismic zone and there is very little seismic strength in the rotten wall structure. This home will require rebuilding the frame and redoing the sheathing, using a system that is more consistent with the seismic fault.

Some of the world’s largest earthquakes have occurred here in BC. It’s home to thousands of small earthquakes every year. Learn More about Property and Earthquake Preparedness.

Lastly, Steve identifies another issue in the process of this renovation in Vancouver, BC. This issue goes back to the 70s and 80s when there wasn’t a lot of thought given to drainage and flashing detail. There is an extensive amount of sheathing damage and framing rot where the deck connects to the house. Water is coming off the deck and getting in behind the structure.

These types of details have now been fixed because of the new building codes and also the attention that the carpenters and the inspectors are now giving in British Columbia. A structural beam that is supporting the deck is not tied into the main structure.

This is a perfect example of what can happen when you’re not following the building code. Read more on how Kemp Construction builds to BC Step Code and Net Zero.