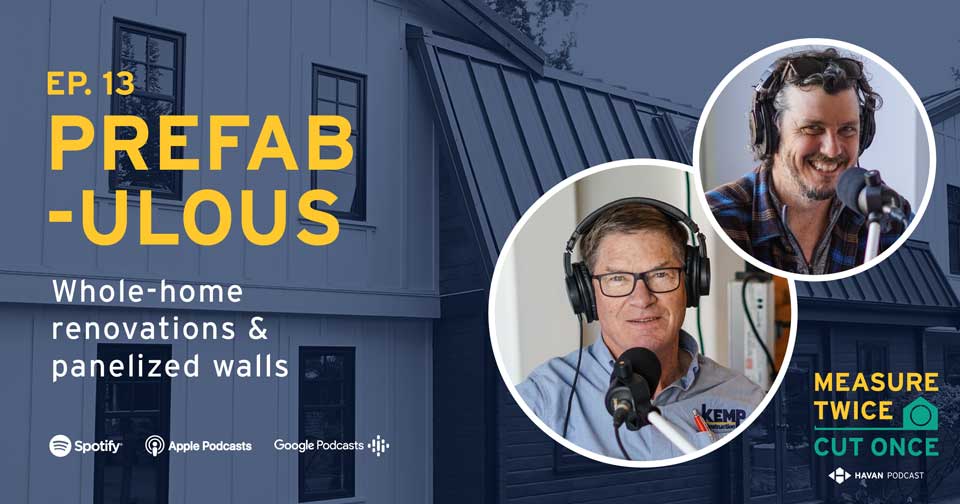 Extending the life of a traditional prefab Pan-abobe home with factory-built panelized wall systems, Steve Kemp of Kemp Construction believes you can add life to almost any home, noting the ones with quirky designs often yield the best results. Building walls in a controlled factory environment increases quality and precision, reduces installation time, limits the environmental impact, offers price assurance and is estimated to have a 25% reduction in waste.

Join Mike and Jennifer-Lee on Measure Twice, Cut Once as they explore whole-home renovations with Steve, using state-of-the-art building science.

Highlights of the conversation:

Mike: Steve, economics obviously play into the decision making process, but beyond simply the cost of it, what are some of the key considerations and factors that we would look at if we’re deciding to build a whole home, a new tearing down our old home, or do we want to renovate our existing home? What are some of the things that you would look at and advise me of in regards to my home or Michael’s home to help us make the right decision?

Steve: Well, there’s a number of things that come into play. One example would be where the existing house is in terms of its proximity to let’s say, a stream or other situations. Back in the seventies or eighties codes and the setback restrictions were different than they are now. So, if you like where your house is situated on a lot, but you want new, then basically you’re going to do a complete total reno. So, where the house is situated now is one of the factors. Total cost is another. If you look at doing a new and remodeling, it is a lesser cost than going to a brand new custom home. It takes less time generally to get it up and permitted…You really have to look at all aspects to see at the end of the day, what’s going to be your best bet. So it’s not just one thing in general, but it’s a, quite a number of things. There are some people that want a new house period. End of story. They’re going to go straight to that path, regardless of what’s on the lot right now.

If you like where you’re living it’s a good idea to try to find a way to do the renovation so you can  stay with your community and stay with your friends.

When considering a whole home reno or new build, take your idea to city hall to see if what you want is allowable on the lot.

Jennifer-Lee: I know things are different depending on what municipality or is it harder to like go to a city and be like, hey, we have this existing structure, but we want to add on this amount of square footage. There’s a lot of different permits and things that you need like that, or a lot of hoops to go through. Is it a really hard process?

Steve: It can be. Now you’re not going to get too many pan-abodes around town because it’s mostly something out in the country or suburbs. So, the first step is you go to city hall and say, this is my house. Could you pull it up on your map? And then this is what we’re interested in doing. Is it possible to do what we want on this lot? That’s the first thing we tell somebody. They want to add X number of feet. Well go to city hall and let them know what you’re intending on doing. And they’ll say whether or not this lot can actually accommodate the size of building that you want. So that’s number one… Before you get too far into it, you want to make sure that the city is going to be on-side and it fits the new regulation.

Building walls in a controlled factory environment increases quality and precision, reduces installation time, limits the environmental impact, offers price assurance and is estimated to have a 25% reduction in waste.

Steve speaks about wall panelization in Canada and the benefits of this process.

Steve: Well, the concept of panelizing, actually has been around for a long, long time. Quebec, for example, is way ahead of the curve, because they unionized carpenters and builders looking for a better, more efficient way of doing things. If you’re in Europe, let’s say Switzerland, I just heard back from a builder there. 90% of all your construction is panelized. So what that means is that you’re taking any design. It’s not limited to standard or basic designs – take any design.

The new software that we have is quite interesting. We take the architectural software, we take the structural, we put them together and then we create a wall by wall detail of that house. Then you’re building it in a factory, in a controlled condition. The wood’s coming into that factory, all dried and wrapped, and then it’s getting covered. And then it goes to the site all dried and covered. And then your roof is on, in a matter of a week or less, or a little bit more sometimes. So the house stays dry and it’s easier doing all the small details when it’s in a factory, when you’ve got a roof overhead, you’re not battling the rain. You’ve got people that are trained to do the job, so controlling the quality. And the big thing for our client is the house is basically going up very, very quickly.

You don’t have to dumb down the house design to use panelized wall systems. The structural requirements and custom cuts get built into the wall at the factory. Whereas traditional custom homes are more detailed, passive homes are driving a simpler design to help achieve energy efficiency.

The original home structure – a Pan-Abode Home – was left in the middle, while a two-storey addition was added to one end. On the other end, a floor was added above the old kitchen to create a spacious master bedroom with balcony. Read the Full Story

Listen to HAVAN’s podcast series, Measure Twice, Cut Once and discover housing solutions, to build the home right for your family. Protect your investment and family. Love the home and neighbourhood where you live!